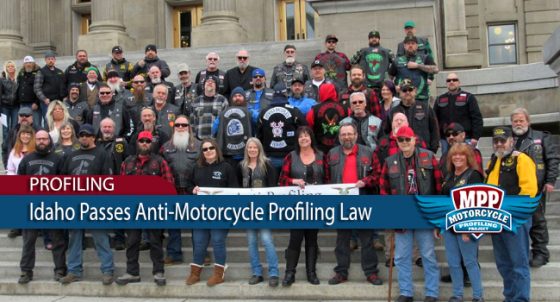 In the midst of the global corona virus pandemic there is not much “good news”. But for motorcyclists in Idaho there is a sliver of positivity in a sea of crisis. On March 18th, 2020 the state of Idaho became the 4th state to pass a law addressing the issue of motorcycle proﬁling. Awaiting the governor’s signature, S 1292, sponsored by Representative Robert Anderst, passed the Idaho House of Representatives on a 37-30 vote after previously passing the Senate 25-9.

S 1292 defines the term “motorcycle proﬁling” and prohibits the practice. And like the 3 states that have previously addressed the issue- Washington State (2011), Maryland (2016) and Louisiana (2019)- S1292 doesn’t allow monetary claims against law enforcement. The Federal Civil Rights Act remains the mechanism of monetary relief for victims of proﬁling. Rather, state anti-motorcycle proﬁling legislation provides a mechanism for targeted individuals to receive dismissals and exclusion of evidence based on an illegal stop, in addition to enhanced law enforcement training intended to curtail the discriminatory practice.

The law in Idaho is the direct result of a 5-year long grassroots effort led by Idaho ABATE. Idaho ABATE is a quintessential example of the democratic process at work. With persistence and preparation, legislative opposition can be reversed. Legislators deal with hundreds/ thousands of pieces of legislation annually. Idaho ABATE did not allow previous failures since 2017 to discourage the legislative effort. Instead of giving up, Idaho ABATE persisted and was eventually successful educating and gaining the support of legislators that previously opposed the idea.

The Motorcycle Proﬁling Project congratulates Idaho ABATE, Representative Anderst, and those that supported the effort- you know who you are! Working with you was a pleasure!